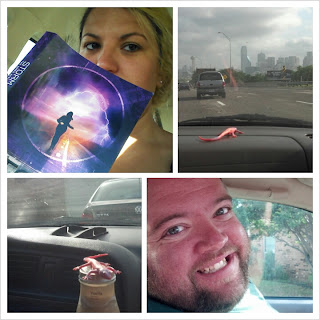 Today’s post is typed up while driving from Dallas to La Monte, MO.

The big question in Storm, by Evan Angler, is “What is really going on?” Mr. Arbitor volunteers to help DOME search for Erin, but it’s really to rescue his daughter. Lily continues to “revise” Eddie, but really she needs/wants him fighting the system. Arianna “captures” Logan, Peck, Hailey, and Erin, but really she’s protecting them from DOME and the IMPS. Connor’s parents sabotage the plant that makes it rain, but really they are protecting people from Trumpet. Logan follows Lily’s orders, saves the weather mill, but unleashes a plague. And all of it went according to Cylis’s plan.

Overall Impression: I thought the second book in the series was a vast improvement over the first, so I was looking for the third to be even better. I’m not sure it quite hit the mark. Where the first book felt like a lot of exposition, the second was really good with rising action and a climax. I felt like the third slipped back into a bit too much exposition, although it did pick up toward the end.

Also, with the second book, the jumps between characters were done at high-drama moments, so they helped build anticipation. Just when a character was figuring something out or about to reveal something big, it would jump to a different point of view, building suspense. Those transitions did not work quite as well with this book.

There were some surprise twists – I am still not sure how I feel about the author writing himself into the book. I thought the “Notes from the Author” at the beginnings and ends of the books were a neat touch, but it was strange to be reading about the characters reading about themselves in Swipe. Also, the Ultranet at the very end of the book is somewhat intriguing.

Overall, the book kept me interested and reading, but was obviously one of a series rather than a good stand alone novel.

In conjunction with the CSFF Blog Tour, I received a free copy of this book from the publisher.

Email ThisBlogThis!Share to TwitterShare to FacebookShare to Pinterest
Labels: Christian Dystopia, Christian YA, Evan Angler, Storm, The Dust, YA literature